The S.W.A.T. team has only patrolled my neighborhood once. We bought this house on an overcast day during a blitzkrieg trip down from Alaska, but when we moved in, there wasn’t a single cloud in the sky. I remember pausing with a box of dishes in my hand and looking east and seeing the building for the first time. I initially thought it was a Wal-Mart which spawned instant disappointment; who’d want to live so close to pure evil? My disappointment doubled when I noticed the sun glinting off of the razor wire. I’d much rather live a half mile away from a cesspit of consumerism than the adult detention center which was in fact my new neighbor.

One of the inmates was the type you usually only read about or see in shitty movies. He had car-jacked an eighty-three year old man and then executed him with a small caliber pistol before driving away in his outdated Lincoln. My wife was out of town when he escaped and I had the house to myself and my daughter. I guess he orchestrated some sort of mini riot/prison yard fight to distract the guards and then scaled three different fences of increasing height, all topped with razor or barbed wire, and then ran through my neighborhood. I had no idea. My next-door neighbor came over to check on me and when I opened the door, I noticed the S.W.A.T. team patrolling the streets over his shoulder. They had dogs and machine guns and batman-esque utility belts and those really cool radio thingies around their necks that you see in the same shitty movies that portray horrid criminals. He gave me the gist of what had happened and told me that the S.W.A.T. team was actually stopping outgoing traffic to check people’s trunks just in case he had taken a hostage or was being smuggled to freedom.

I have an arsenal of sorts, and this is the scenario we all “prepare” for, right? I live in a neighborhood of rednecks and guess what; the S.W.A.T. guys weren’t the only ones with assault rifles. I had a few choices. Should I arm myself with matching Glocks complete with mounted halogen lights in case I had to roll across the floor like Mel Gibson double fisting hand cannons? Or maybe I should strap on the .44 magnum and then just maybe I could finally ask someone if they feel lucky. “Well do ya, Punk?” Nah, I opted for the Remington 870 Magnum Marine pump shotgun loaded with alternating slugs and buckshot. It’s the same gun that the CIA uses for entries except mine is nickel and won’t rust. And after all, if I trusted it for bear protection back home, it’d do against anyone stupid enough to come knocking. I sat on my couch watching TV with the silver weapon in my lap until everything died down and the “all clear” was given. I’d imagine quite a few of my neighbors went to bed disappointed that night. We’d all have to put our guns away and acknowledge, if only to ourselves, that they’re useless.

There’s something viscerally pleasing about cooking meat over an open fire. I promise to tie this all together by the end so bear with me. I have a fire pit in my backyard and I had a few of the welders from work fabricate a spit so I could cook like a caveman. It’s big enough for an entire pig (or four turkeys… or twelve chickens… you get the idea). It’s a simple truth; I love cooking like a gourmet caveman. In fact, I roasted two turkeys over the fire this last weekend while I was hosting a UFC viewing at my house. Can you picture us? Five or six guys brandishing blackened bird meat and yelling at the TV while two men fight in a cage dripping sweat and blood? If that isn’t atavistic, I don’t know what is.

But turkeys are too healthy when you think about it. And I did. So I made a witch’s brew of butter and honey and red curry and injected the liquidized fat and sugar into my turkeys with an enormous syringe before sticking them on the spit. The honey-butter swells and sizzles while you cook the birds and the smell is intoxication to anyone proud of their canines.

I roasted them over mesquite charcoal from Mexico and peach wood. I have a peach tree right by the pit and I’ve found that if you throw in some of the fruit, it adds a pleasant favor (that’s usually missed by my drunken house guests).

Anyway, I’ve only roasted a pig once because it’s a gory feast to serve. If you get a big one, the head needs to come off via an enormous cleaver and there’s something sadistic about tying a pig’s feet together with bailing wire so he won’t fall off the spit. It took six hours to roast the beast and twenty of us barely ate half of it. I awoke the next day to a pig carcass and I had no idea what to do with it. A friend came over to help me clean up and we stood there with an empty keg between us and stared at the carnage for a good fifteen minutes before it came to me.

When prisoners are released from the adult detention center they have two choices; they can get a ride, or take the back way out which is a long and winding dirt trail that leads right past my neighborhood and empties out by an elementary school like a poorly positioned sewage drain. They’re mostly nonviolent criminals that were behind bars for this or that drug offence and I’m sure they’ll be back to once again be released so they can walk past my little world with all their possessions wrapped up in a white plastic hobo bindle. That trail represents a depressing cycle for them; one of freedom and incarceration punctuated by nice houses and happy children that could’ve been theirs if not for some piss-poor decision making.

My friend and I took the pig and threw it into a 55 gallon steel drum which we loaded into the bed of my pick up. We should’ve had the theme music from The Sopranos playing in the background because it definitely felt like we were doing something nefarious. We took the pig down that trail that means freedom for so many and found an ant hill slightly off the beaten path and left the pig for the insects. Those little red bastards swarmed out of their hill with veracious efficiency and cleaned that pig down to white sun-bleached bone in about a week.

Now that they’ve had a taste of meat would they want more? Had I created an army of red ants that preys on unsuspecting prisoners that shouldn’t be wondering past elementary schools anyway? I’d like to think so. At the least, I blew up the population of that ant hill thanks to the ridiculous influx of food that fell like manna down into their lives from the back of my F-150. They’d feed and breed and feed and breed in their own little gruesome cycle until the pig was consumed. The ants would be forced to strike out and form secondary colonies because the cornucopia was now empty. Maybe ants even have a shared conscious and the memory of all that meat would be passed down through the generations as a moment of genesis. It’s odd to think that such an event could be so profound from an ant’s perspective yet to us, it was just an act of lazy convenience.

And those are the thoughts that bounced around inside my skull as I cooked my turkeys. It’s pleasant to sit and think by the spit in the shade of my grape leaves. There are a few hornet’s nests close by, but if you hold really still, they usually don’t bother you. You can leisurely turn the spit wheel with some iced tea while the birds fly overhead completely oblivious to the fact that two of their cousins are roasting below. 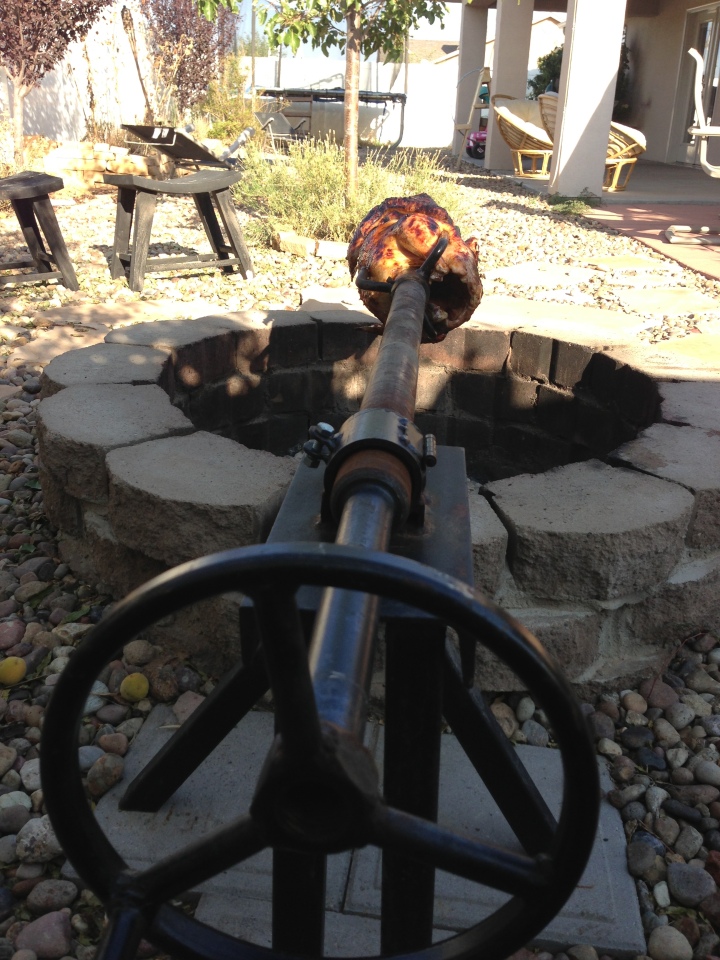